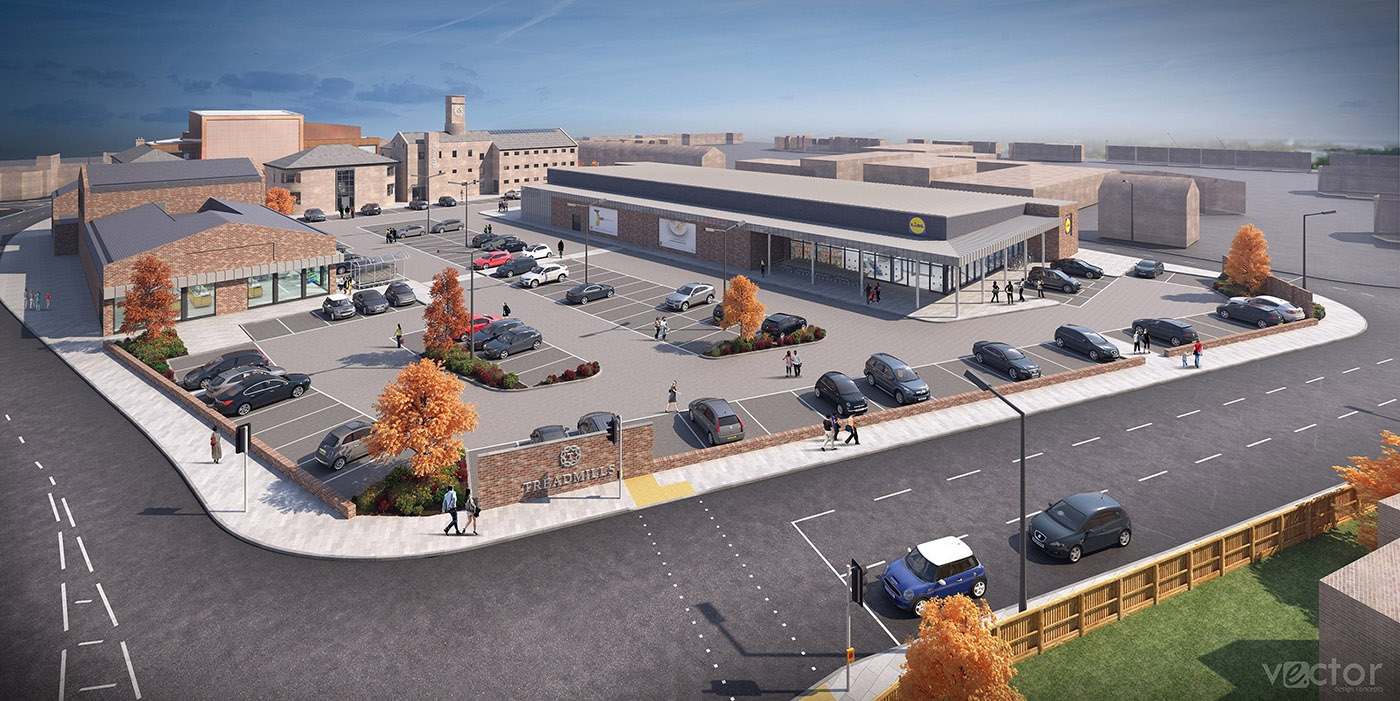 Image – An aerial artist’s impression of the Treadmills development, Northallerton’s most significant regeneration scheme for decades.

Detailed plans have been submitted for the transformation of the former Northallerton Prison site into an exciting new retail, leisure and business destination.

An application for full planning approval and listed building consent has been put forward by the Central Northallerton Development Company, a joint venture between Hambleton District Council and Wykeland Group, for the heritage-led Treadmills scheme.

The ambitious plans are the culmination of extensive work over the past four years in preparation for Northallerton’s most significant regeneration scheme for decades. 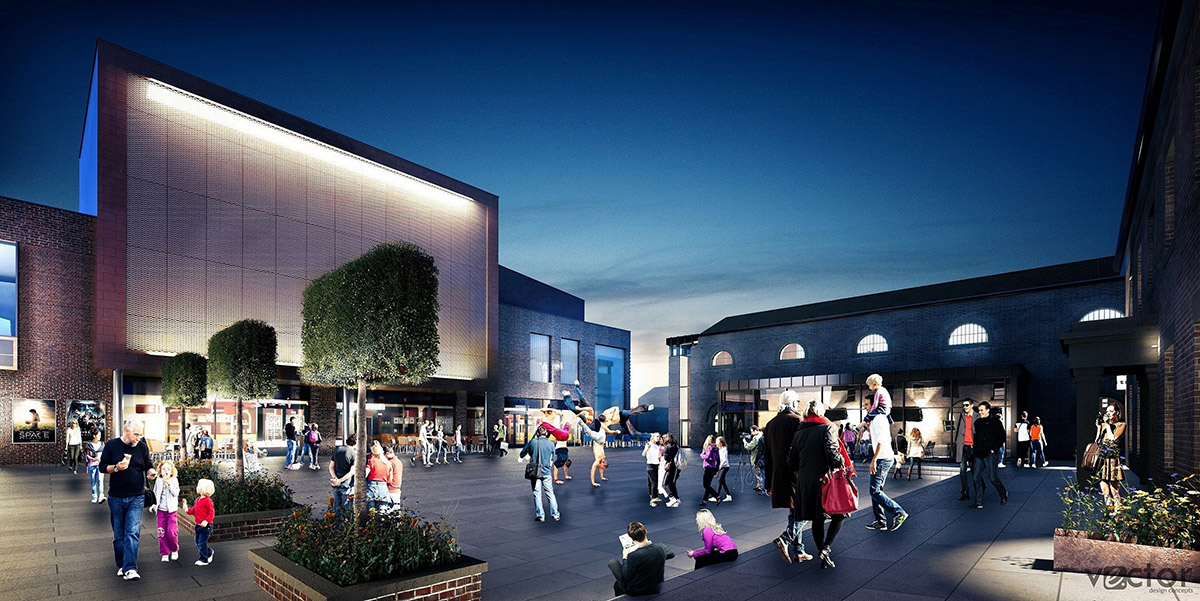 Image – A computer-generated image of the focal point of the Treadmills development – a new civic square and performance space bordered by the converted former prison buildings and new cinema.

The proposals have been refined to respond to feedback received during a comprehensive public and stakeholder engagement process, including consultation with Hambleton District Council, North Yorkshire County Council’s Highways department, Historic England and Northallerton Town Council.

Two public consultation events were also held in June 2018, attended by around 450 people, at which 65% of people who completed feedback forms said they supported the scheme, with only 15% opposed.

The plans for the  £17m Treadmills scheme set out a comprehensive redevelopment of the 3.5-acre site, including a mix of retail units, offices, cafés and restaurants, a cinema, apartments and car parking. The focal point of the development will be a newly-created civic square and performance space. The scheme also includes Northallerton’s first “changing places” fully accessible toilet facility. 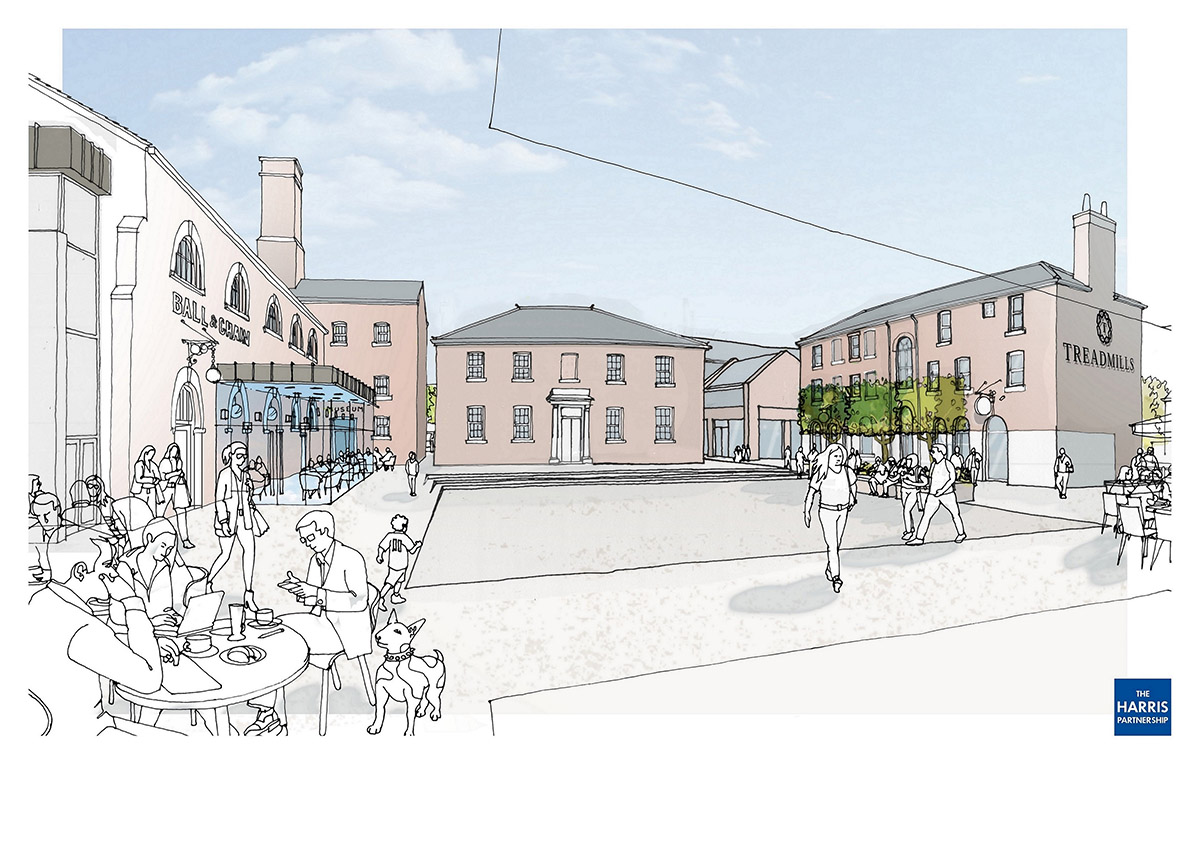 Image – An artist’s impression of the new civic square, bordered by the former Northallerton Prison buildings, which will be sensitively restored and converted as part of the scheme.

Summarising the scheme, the application says: “The development proposals will deliver major, transformational change to this area of Northallerton. This heritage-led scheme will redevelop a vacant local landmark and deliver a mix of uses, to the benefit of the local community and economy.” 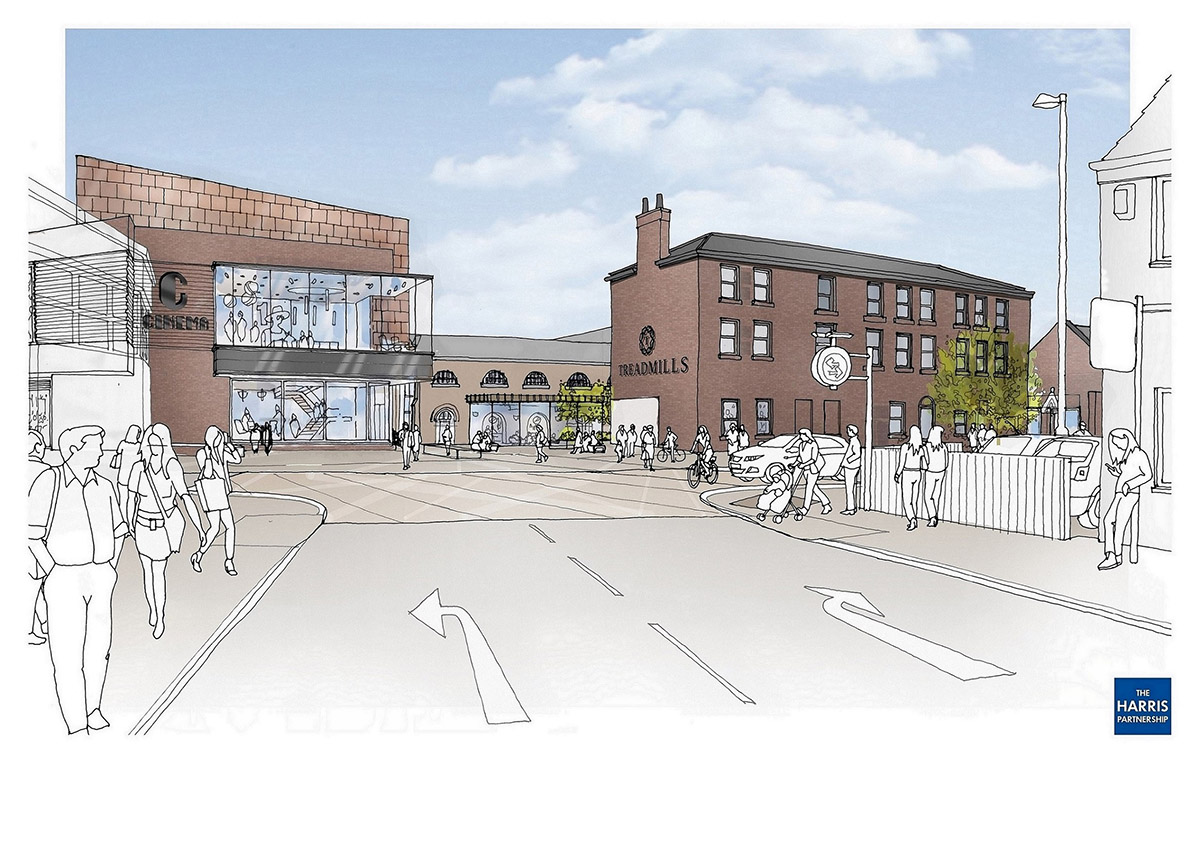 Image – An artist’s impression of the Treadmill scheme seen from Zetland Street, with the new cinema on the left.

The prison buildings to be incorporated within the development are the former Staff Tenement Block, Governor’s House, 1818 Female Wing, 1852 Female Wing and Link Building. Conversion of these buildings will respect their history and heritage and key period features such as the cell windows will be retained.

The application says the scheme will “renovate, repair and sensitively convert the original prison buildings and bring vacant heritage assets back into active and beneficial use”. It adds that the proposed new buildings within the scheme have been carefully designed to “respect the form, scale and materials” of the retained listed buildings.

A key feature of the development will be the presence of successful technology incubator the Centre for Digital Innovation (C4DI), which is an organisation that helps companies grow and traditional businesses innovate. C4DI will operate the offices and co-working spaces to support the development of start-up and growing businesses in the digital tech sector.

C4Di at Treadmills will be based on the highly-successful C4DI operation in Hull’s Fruit Market, which has seen continual growth since its launch in 2015 and has played a key role in Hull becoming established as one of the UK’s fastest-growing digital hubs.

Wykeland Development Director Jonathan Stubbs said: “A huge amount of work has gone into developing the vision for Treadmills and translating that into this detailed planning application.

“We’ve worked very closely with Historic England to ensure these plans pay full respect to the unique history and heritage of Northallerton Prison while also setting out exciting proposals for the future of this key strategic site.

“This scheme has been designed to extend and enhance the town centre and bring new vibrancy to Northallerton, including through a stronger and more dynamic evening economy. It will also create a new, high-quality destination and public space, strongly linked to the commercial heart of the town. 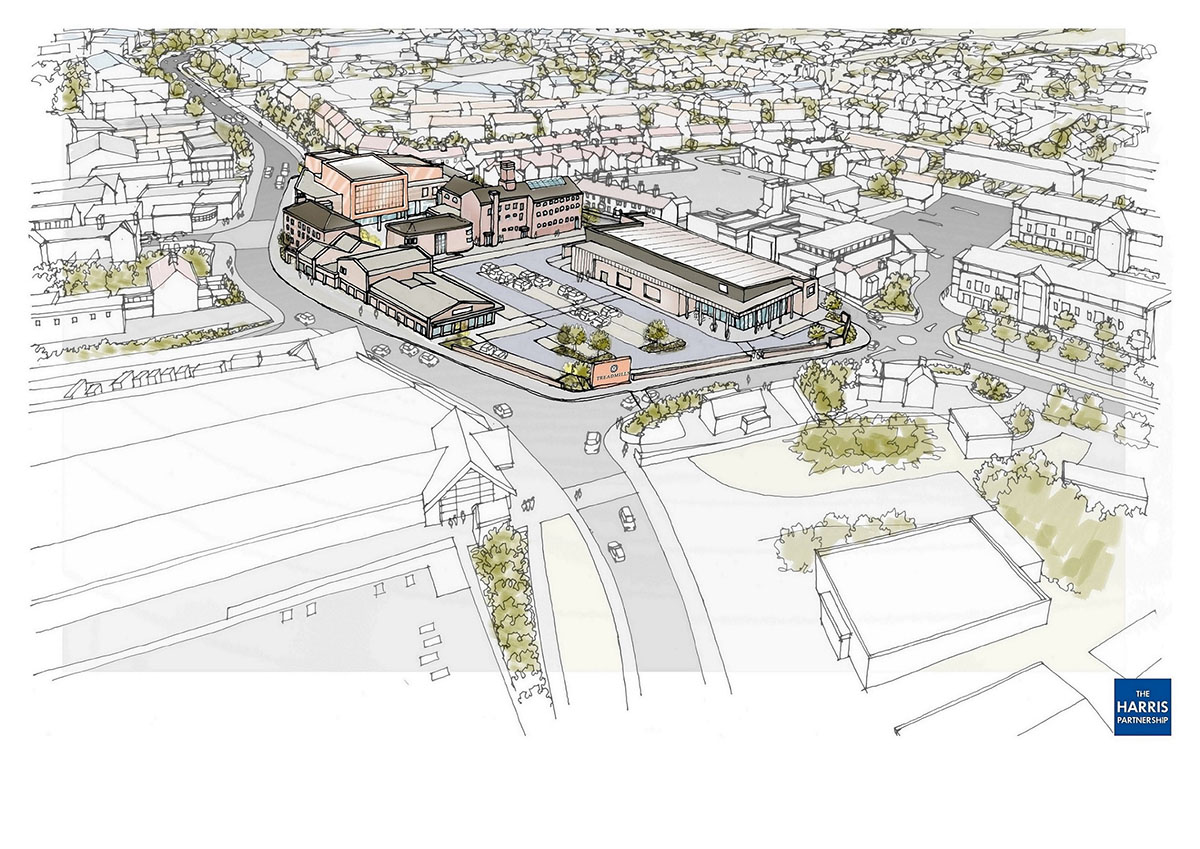 Image – A computer-generated image of the Treadmills scheme, with the retail units and car parking in the foreground and the converted prison buildings to the rear.

“Treadmills will provide new investment, facilities and jobs to complement existing provision in Northallerton and ensure the continued economic growth and prosperity of the town for years to come.”

Northallerton Prison housed prisoners for more than 230 years before closing in 2013. Two years later Hambleton District Council bought the site from the Ministry of Justice to secure a key strategic site for redevelopment.

Subject to planning consent, the Treadmills development is proposed to be delivered in phases, beginning with construction of the retail units to the south of the site, with work expected to begin in early 2019. 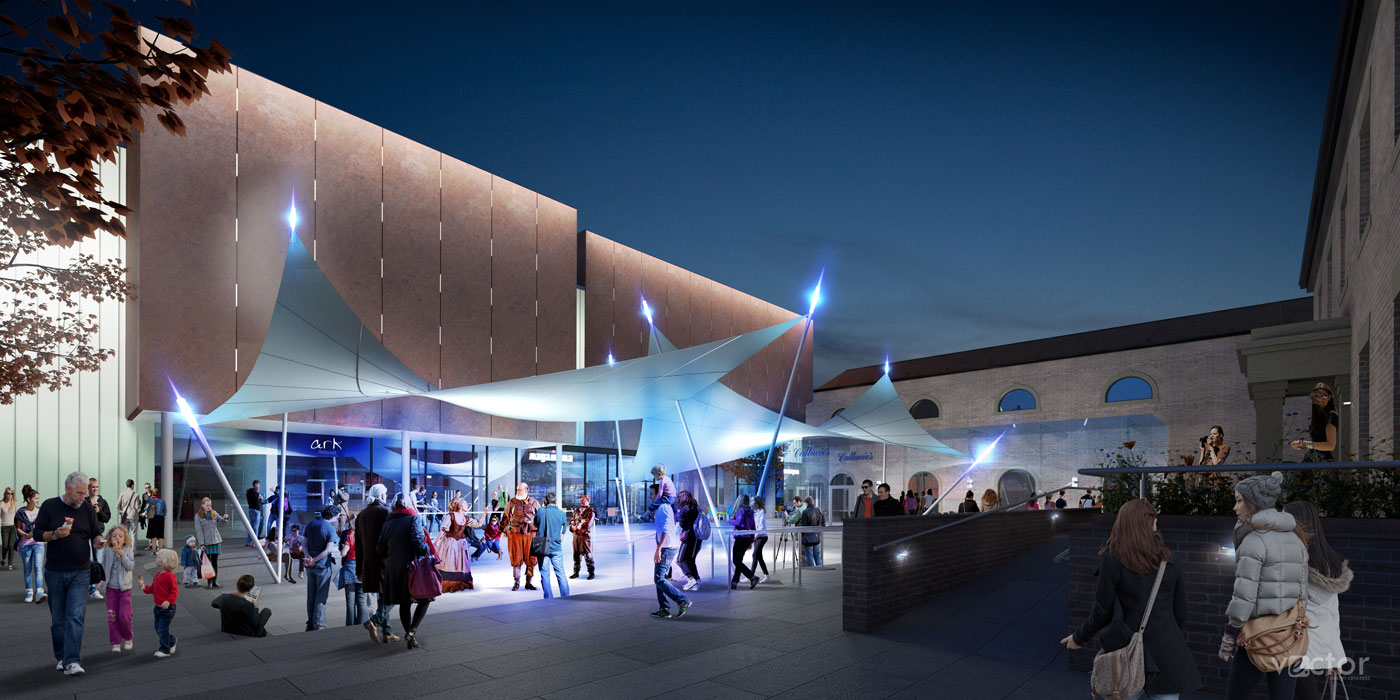 PLANS FOR NORTHALLERTON PRISON TO GO ON DISPLAY

PLANS FOR NORTHALLERTON PRISON TO GO ON DISPLAY